WANT to travel from New York to Los Angeles in as little as three and a half hours? It will cost you more than $30,000. The extraordinary price point is tagged onto Bombardier’s Global 7500 business aircraft – the world’s largest and longest-range private jet. With a range of 8,860 miles and up to 14 hours, flights from New York can reach as far as London, Moscow, Dubai, and New Delhi. 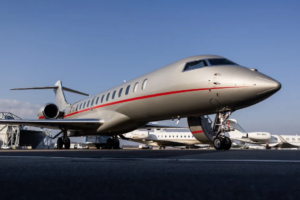 The massive jet reaches a maximum speed of 0.925 Mach and holds up to 19 passengers. Released in 2018, the aircraft has since been dubbed the “Ferrari of the Skies.” The near-supersonic speed and exclusive features have attracted many celebrities including Kylie Jenner.

Before you go rushing for a ticket, those who wish to try it out for themselves will have to fork over $10,000 per hour.

However, for some, that price may be worth it. Travelers can find four separate living spaces on the jets including a meeting room, dining room, entertainment room, and a master bedroom. The private jet also features a massive galley with microwave ovens, espresso machines and chilled storage. 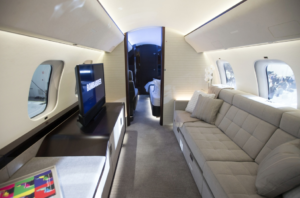 In all the main areas, passengers can find large wall-mounted TVs, massive windows, and concealable side tables. The plane — worth up to $75 million — also features Bombardier’s signature Nuage swivel seats that are “ergonomically adjustable.”

Additionally, passengers are given access to small dials with which they can adjust the temperature and lighting of the aircraft. While the plane can seat 19 – it can only sleep around eight people comfortably. 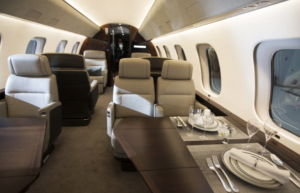 The sleeping arrangements are limited to approximately two people in the bedroom, two people on the couch in the entertainment room, two in the meeting room and two in the dining room. Travelers can find lavatory’s in the front and back of the aircraft, which are also next to wardrobes for passengers and staff items. Not only is the Global 7500 an upgrade for passengers, but for the aircraft crew as well.

In November, pilots for private charter company VistaJet – which is the biggest operator of the Global 7500 – told Business Insider the upgraded flight deck design helps boost safety and flight duties management as well as reducing their own workload. Specifically, the pilots have been given “fly-by-wire” technology as well as permanently side-facing jump seats, according to Bombardier. 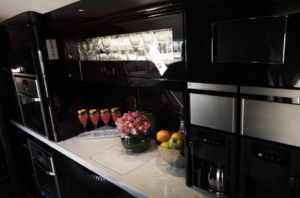 If you have the cash to spare, the company touts that passengers will have the “smoothest ride” of their life, thanks to Smooth Flex Wing technology.VistaJet is the largest operator of the Global 7500 with 15 of the jets, according to Business Insider. Deep-pocketed travelers can also reportedly rent the plane from other companies like NetJets and Phenix Jet.