First Stop on the Wildlife of the World by Private Jet – Sabah, Borneo

A team of outstanding National Geographic wildlife experts and their guests made Sabah the first location in Asia to witness wildlife in the wild through their programme – Wildlife of the World by Private Jet. 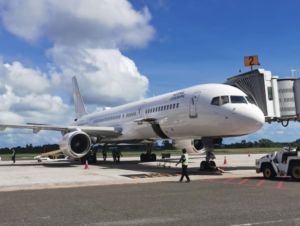 Sabah was chosen and put on the map as part of the luxury private jet trip because of its wildlife diversity and how much each area has to offer in terms of knowledge and wildlife sightings. The top-notch team of experts includes author and National Geographic emerging explorer Sandesh Kadur, and primatologist and conservationist Mireya Mayor.

The specialists and guests travelled in style aboard a refurbished and decked-out Boeing 757 private jet, branded under the National Geographic brand, across three continents, Asia, Africa, and Europe, staying in exquisite lodgings. After a two-day stop in Singapore, the experts flew into Sandakan for a three-day wildlife adventure. Visiting Sepilok Orang Utan Rehabilitation Centre (SOURC), Bornean Sun Bear Conservation Centre (BSBCC) and spending two nights at Kinabatangan River. While at SOURC and BSBCC, the experts and their guests were given private tours and talks. 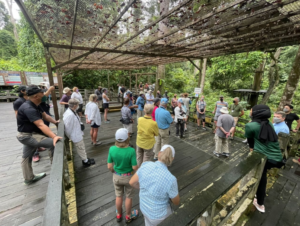 “I am pleased that the Nat Geo experts’ team with their VVIP guests were here to experience our amazing wildlife. I commend Sticky Rice Travel for their efficient planning and arrangement in guiding the Nat Geo group in Sabah,” said Noredah Othman, CEO of Sabah Tourism Board.

“We also had a private jet that came into Sabah in October this year, bringing in VVIP guests for wildlife tours. This private jet was brought in by Abercrombie & Kent with their ground handler Asia Top Team Travels. Sabah is a world-class nature and wildlife destination, we are also known for our conservation efforts,” Noredah said.

“A big thank you to MAHB, Sabah Immigration Department, Royal Malaysian Customs Department and PDRM in Sandakan airport for their continuous cooperation and support on the private jet arrangement,” she added. 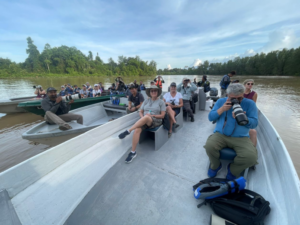 Grace Chan, Sticky Rice Travel General Manager said, “We are very excited to host up to three private jet arrivals annually to guests who are all very passionate about wildlife. The close proximity of Sepilok and Kinabatangan from Sandakan enhances possibility of experiencing the river and seeing Orang Utans, making it a key destination in the overall program. Thus, putting Sabah on the radar as one of the top wildlife destinations in the South East Asia region.”

Gennaro Nardone, Asia Top Team Travels Managing Director said, “In 2015, Abercrombie and Kent came to Borneo to scout for destinations which we crafted an interesting itinerary for them and finally in 2017 we had the first private jet in Sandakan for a four-day three-night Sandakan and Danum Valley trip. In 2021, private jet was fully sold however due to Covid restrictions the trip was cancelled, but now they are back. Previously in October, we have done another private jet with a full flight of 48 VVIP guests and 20 staff.

“Due to positive response from the guests, Abercrombie & Kent was able to sell off an additional departure private jet for February 2023 and another one for February 2024. Sabah has the potential to be the ‘In’ destination for the high-end market, allowing visitors to see wildlife in the wild and experience what it’s like to live in a pristine jungle,” Gennaro added.