Elvis purchased the jet on December 22, 1976, for $840,000 – that’s around $4.4M in today’s money. The King of Rock and Roll owned several private jets, two of which are currently showcased at Graceland. 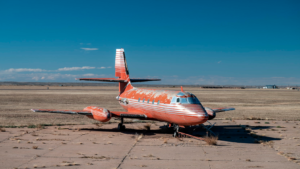 This example is one of 202 production JetStar airplanes manufactured by Lockheed. If you are unfamiliar with the name, Lockheed Martin is a global security and aerospace company. The brand’s JetStar model was a go-to choice for many A-listers, such as the Shah of Iran or President Richard Nixon. It even made its appearance in the James Bond movie, Goldfinger, serving as the antagonist’s private means of transport.

JetStar conducted its first flight in September 1957 and was introduced four years later as an extremely capable aircraft – it enjoyed success both in the civilian and military fields. It flew with the C-140 designation for the U.S. Air Force and designations L-329 and L-1329 for business services. Actually, the JetStar was the first dedicated business jet to be released, and it was also the largest model in its class. Production ran for two decades, until 1980. However, it’s still in action today, preferred by the Mexican Air Force and the Islamic Republic of Iran Air Force.

The airplane was fitted with four engines housed in two pods mounted at the rear of the fuselage. It could reach a top speed of about 565 mph (909 kph), fly for more than 2,500 miles (4,023 km), and its service ceiling was 43,000 ft (13,105 m). Eight to ten passengers could ride in style alongside an onboard crew of three, two pilots, and a cabin attendant. 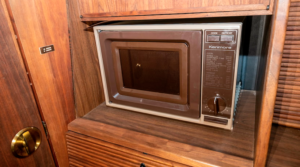 There are a total of six passenger swivel chairs and a sofa, all upholstered in red velvet to match the red shag carpet. You’ll find an ashtray and headphone ports with audio controls for each seating spot. This particular model comes with wood paneling and gold-finish hardware and features a TV with an RCA VCR player and galley, complete with a beverage dispenser and a Kenmore microwave. The cabin boasts wood paneling and trim, and there’s a lavatory at the rear, along with additional storage spaces and cubby areas.

Elvis owned the JetStar for a very short time, in the spring of 1977, less than half a year after the purchase, he sold it. The jet ended up with a Saudi Arabian company and was moved to Roswell International Air Center (ROW) in Roswell, New Mexico. Close to 40 years later, the aircraft sits in the same spot. 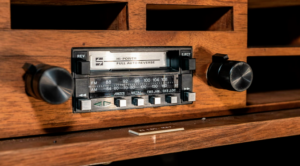 After being moved there, the jet didn’t receive any maintenance, and it was more or less abandoned at the site. Now, the effect of time is clear – there are holes in the fuselage, and the sun faded away part of the red exterior and its silver accents. Furthermore, the P&W engines have been removed, along with numerous cockpit components. It will undoubtedly take lots of work to restore its aesthetics to their former glory, both for the exterior and interior.

The consignor for this machine was Jim Gagliardi of Madera, California. He bought it six years ago for $430,000, or $498,000 after commission and fees. The initial plan was to ship the plane to Madera and make it an “kind of an advertisement,” where people could enter and look. It never came to fruition, and Gagliardi declared he hadn’t even visited the plane in the six years of ownership. 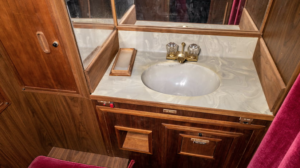 Gagliardi tried auctioning it last August, but no buyer came forward. He had a bit more luck at the Mecum auction – bidding started at $100,000 and slowly increased to $240,000. A telephone bidder offered $260,000, and so the hammer fell. After commissions and fees, the total price stood at $286,000. So, Gagliardi did lose some money, but at least he managed to sell the aircraft.

According to Robb Report, Elvis’ former wife, Priscilla Presley, also attended the event, declaring, “Elvis loved planes and this was one of them. This is my first auction and I’m excited to be here.” Before starting the bidding, the Mecum auctioneer said, “This is an incredible restoration opportunity to create an Elvis exhibit for the world to enjoy.”

And it truly is – however, this aircraft does come with quite a challenge. It will have to be fully disassembled for shipping, but fortunately, Mecum declared that coordinating assistance is available. Let’s hope the future owner will invest in its restoration and make it a proper exhibit. Fans will undoubtedly jump at the opportunity of experiencing a part of the King’s history.