Inspired! Surely one of the Most Unique Holiday Rentals in the World! 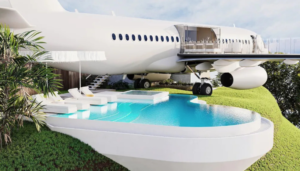 The Boeing 737 used to be part of Mandala Airlines’ fleet, but Indonesian airline officially ceased operations in 2014. A few years later, a wealthy Balinese resident bought the plane, restored it, and had it installed on a high cliff near Nyang Nyang beach in Bali. The aircraft-turned-holiday rental is truly stunning, as is the location.

You approach the aircraft walking along a stone staircase, hidden behind a wooden gate. Inside the aircraft, you’ll find a fully-equipped kitchen, two bathrooms and two bedrooms.

The cockpit of the Boeing jet was converted into a fancy bathroom inside the private villa. The view from the bathtub is spectacular and the wooden furnishing adds a touch of warmth to the experience. 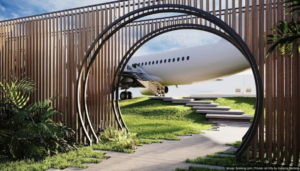 And as a cherry on top, one of the wings is now a patio jutting out into the sea. The outdoor space surrounding the plane was used to create a beautiful garden. There’s also another patio / hangout spot complete with a fire pit.

And last but not least, there’s an infinity pool that looks out towards the sea. The ‘Private Jet Villa by Hanging Gardens Air’ – this is the official name of the rental – is listed on Booking.com for around $7,300.